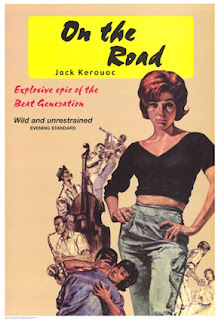 . I can't remember why I picked this book - I think it was one on a list of possible titles, and I managed to find a (free) copy on bookmooch.com. It's certainly not a book I'd ever really planned to read. And, having finished it, I doubt I'll be reading it again.

I'd always thought On the Road

was a 1960s novel*, about someone living rough during that decade, living the hippy dream of LSD, Grateful Dead and giving two fingers to the Man. It's nothing of the sort. For a start, it's set in the late 1940s. And it's about marijuana and jazz and subsistence-level jobs (and poverty). The protagonist, Sal Paradise, spends much of the book driving from one place to the other - so that's "on the road" as in actual driving on the road in a car, not as in living rough like a vagrant (although he does hitch-hike several times). Most of these travels are with an assorted cast of friends, or in order to meet up with said friends. And chief among these is Dean Moriarty, who is "Beat".

The book is a novel but it's actually a thinly-disguised autobiography. The events it describes actually happened to Kerouac, and the various characters Paradise meets are the real people Kerouac met. Moriarty is Neal Cassady, for example; Carlo Marx is Allen Ginsberg; and Old Bull Lee is William Burroughs.

Kerouac wrote On the Road

in what he called "spontaneous prose". It shows. It's not prose you can savour. Much of it possesses a breathless clumsiness which only works if you read it as fast as he apparently wrote it. Kerouac also has a tin ear for dialogue. Perhaps his intent was to document the spontaneity of his characters' thought processes, but the result is that they talk mostly unfettered bollocks.

It's not all bad. Some of the descriptive passages are good, and Kerouac's documenting of the underbelly of late 1940s USA is never less than interesting. A visit to a jazz club in Chicago, for example, is especially impressive, and works so well because its prose is spontaneous. But On the Road

is a "cult" novel - which usually means you either get it or you don't. And I didn't. I don't understand the appeal of Paradise's adventures, I don't understand the appeal of a book you have to read at such a headlong pace. I don't belong to a generation - or nationality - which finds anything all that enticing about its subject. To be fair, Paradise's attitudes seem more twenty-first century than are typical for 1940s America. Which is admirable. At one point, he stays in "Mill City" in California (actually Marin City), and describes it as the only non-segregated community in the US. He mixes freely with blacks and Mexicans... which seems unusual for a country which practiced overt institutional racism until the 1960s.

On balance, On the Road

falls squarely in the middle of those books I've read during my reading challenge. I didn't hate it, but neither did I stick Kerouac's other titles on my wants list. I enjoyed bits of it, but I can't say I enjoyed all of it. Perhaps if I'd been alive in the 1950s and read the book at that time, perhaps if I were American, perhaps if I actually liked jazz...

(* if the edition I read had the cover art I've used to illustrate this review, then perhaps I wouldn't have thought it was about the 1960s)
Posted by Ian Sales at 08:51

And yet, I would LOVE to own that edition!

Sorry you didn't become an instant Kerouac fan. I never advise starting with On The Road. It often gets the reaction you had.

I'll admit it's a lovely cover - which is why I picked it instead of the dull purple and black Penguin edition I actually own :-)

I read "On the Road" as a high schooler living in North Carolina in the early sixties. It was the perfect book for the time and it can be argued that it had a considerable influence on the generation that wound up in San Francisco during the Summer of Love. Thinking back on it, I don't think I would care much for it today because of its style, but for a generation whose mantra was GO it was seminal.

As I recall, I enjoyed The Dharma Bums a lot more.

Ian, you submitted a story to "Pantechnicon" a few months ago called "The Amber Room" - we tried to reply but the e-mail address seems to be defunct now! Please get in touch at submissions@pantechnicon.net. Thanks!

I finally managed to get all the way through On The Road for the first time earlier this year, after several aborted attempts starting when I was still at school. I think you really have to be born in the US at at certain time to 'get' it.

What I came away with was the notion that it was a book about sociopaths. These are people who make their way across the States while being seriously pretty fucked-up in the way they treat people, particularly women, as furniture. There's some occasionally nice writing, but it's the same appeal that draws some readers into vampire novels, the idea of having a good time, all the time, without care of consequences, with all the rules thrown away. I don't think I could imagine ever going around being as thoroughly shit to everyone I meet as the characters in 'Road do. Yes, it's a work of fiction, but as you say it's also very close to autobiography.

In the end it's a sad portrait of people I'd spend a great deal of time avoiding, people with not very much at the centre of them. It's worth recalling the author died a depressed, nationalistic drunk while living with his mother and barely, I think, into his forties.

It's true enough that they're not a nice bunch, and their treatment of women is pretty poor - Ed Dunkel, who marries Galatea, and then repeatedly leaves her; Dean Moriarty and his two "wives", and the arrangement he has with Sal Paradise to take one...

Perhaps another aspect of the book's appeal is that its characters have turned their back on responsibility and good citizenship. They're not working towards the American Dream... but they are taking from it what they want and can get. And it's the concept of a life where you can take, rather than work, that might explain some of the book's popularity.