I've not written about sf for a while. Or posted a list. People like lists, if only to argue over. So here's one likely to generate some debate: the best ten obscure science fiction films*. My definition of "obscure" alone is probably open to interpretation - at least three of films below I also included in my list of best sf films since 1991. I also wouldn't, for example, describe Andrei Tarkovsky's Solaris

as an obscure film, especially as it's been remade by Hollywood. The same is true of Open Your Eyes

by Alejandro Amenábar. Mind you, I wouldn't call Tarkovsky's Stalker

obscure either. Or Alphaville

by Jean-Luc Godard. All good films, of course. Well, not the Hollywood remakes. They're not very good, and are best avoided. Stick to the originals.

In fact, with the remake of The Day The Earth Stood Still

due for release later this year, and recent news that J Michael Straczynski is working on a "sequel" to Forbidden Planet

, you have to wonder when Hollywood will get the message.

Anyway, below are ten science fiction films for which I feel the word "obscure" is a reasonably accurate description. One or two might be considered turkeys - certainly you're only likely to find them in budget sf movie DVD sets, or being broadcast at 2 a.m. on some TV channel no one ever watches. That doesn't mean they're not good films, just that you have to dig a little harder to understand why they're not bad films. Trust me on this.

The list is in chronological order by year of release, not order of merit. 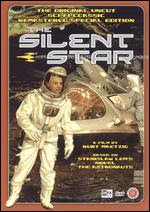 The Silent Star, dir. Kurt Maetzig (1960) - AKA Der Schweigende Stern. Which should clue you in that this film is German. In fact, it's East German, one of four sf films made by East German studio DEFA. It's perhaps best known to US audiences by the title of its badly-edited and -dubbed English-language version, First Spaceship on Venus. The story is based on a novel by Polish sf author Stanisław Lem, and concerns a message discovered embedded in a crystal found at the site of the Tunguska Event. The message is partially decoded, and appears to have originated on Venus. An international crew of the best scientific brains is recruited - Soviet, German, Indian, Japanese, "African", Polish, Chinese - and sent on the rocket Kosmokrator to Venus. En route, they finally decode the message fully... and learn it is a plan to invade Earth. But what they find on Venus is not at all what they expected... The sets of Venus are bizarrely alien, the model work is excellent, and the whole film has a peculiarly Soviet scientific internationalist atmosphere.

Queen of Blood, dir. Curtis Harrington (1966) - this film's low beginnings are a matter of record. It's one of many Russian films bought by Roger Corman, edited, dubbed in English, and with additional scenes starring US actors added, which American International Pictures released in the 1960s. Queen of Blood was based on Nebo Zovyot, and it looks weirdly compelling, despite its B-movie story. I reviewed it last year here. 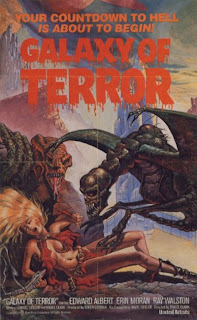 . Yet what they managed to produce was something entirely different. A spaceship is sent to a mysterious planet to rescue the crew of a crashed ship, but they crash themselves. And the crew they were sent to rescue are all dead. They determine that the cause of their own crash was a huge alien pyramid just over the horizon. They decide to explore it... and are subsequently killed off one by one. The special effects are a bit rubbish - one of the alien monsters looks like cheap rubber tentacles - and the cast are better known for their roles on television. But the story works really well - and often reminds me of the first third of John Morressy's novel, Under a Calculating Star

). The ending comes as a real surprise. James Cameron, incidentally, was a unit director on this film, and responsible for some of the production design. 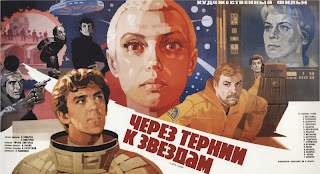 Humanoid Woman, dir. Richard & Nikolai Viktorov (1981) - AKA To The Stars By Hard Ways. This is a Russian film and, sadly, the only edition I have is a badly-mangled English-dubbed version released by some cut-price B-movie re-packaging studio in the US. Even so, the film is clearly bonkers. The opening scenes, in which a team of cosmonauts explore a derelict alien ship in space were plainly filmed underwater. But at least it looks like zero gravity. They find one member of the ship's crew still alive - Niya, played by the weirdly alien Yelena Metyolkina in a strange wig. The film is sort of a love story, and sort of a first contact story, and sort of a cautionary tale of ecological catastrophe. It has to be seen to be believed. It can't really be described. I'm told the original Russian version is very good indeed, and a new director's cut was recently released by the late Richard Viktorov's son. Unfortunately, no edition with English subtitles is available.

, dir. Luc Besson (1983) - an early film by the director of The Fifth Element. There's something very Moebius about the look and feel of the film, but I don't believe he was involved. A man tries to survive in a post-apocalyptic city, while being menaced by another (played by Jean Reno). Filmed entirely in black and white,Le Dernier Combat

contains no dialogue whatsoever. And yet it works. It's also very funny in parts. 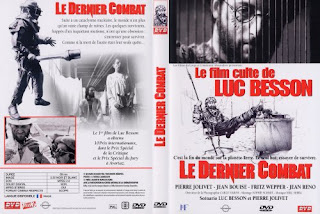 , dir. Jean-Pierre Jeunet & Marc Caro (1991) - this has been a favourite of mine since I first saw it back in the early 1990s. It's another French post-apocalypse film. An ex-circus performer moves into an apartment block owned by a butcher. He's intended to be the residents' dinner - food is extremely scarce - but the butcher's daughter falls in love with him and helps him escape. Sort of. There's a superb set-piece in which one resident tries to commit suicide. And fails. A wonderfully strange film.

Until The End Of The World

, dir. Wim Wenders (1991) - there's not much more I can about this film that I haven't already said here. And I still want the 3-disc director's cut DVD.

, dir. Robert LePage (2000) - I vaguely recall buying this because it looked quite interesting. It proved to be a cleverly-done and subtle sf film. The film opens with a murder - a man is found dead, his brain missing. He proves to be only the first such victim. The film shows how the murder came about - it's all to do with alternate realities. Beautifully shot and acted, the ending perhaps lets the film down, but it's definitely worth seeing. It's apparently based on a stage play, which was adapted for the cinema by the author.

, dir. Mamoru Oshii (2003) - Oshii is better known for anime, but this is a live action film. Shot in Poland. With a Polish cast. It's one of those films which opens with jaw-dropping visuals, and whose story - while not entirely original - doesn't let the film down. Some time in the near-future, people are addicted to a VR war game. One player, Ash, hears of a secret level and tries to find it. Avalon

is filmed in sepia tones and looks gorgeous. Its pacing is perhaps slower than many find acceptable (not to me: I like Tarkovsky's films...), but the visuals are more than enough to keep your attention. 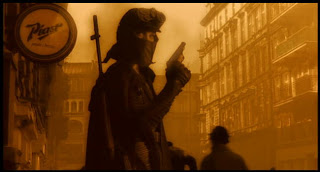 , sort of a live-action anime. Again, the visuals are stunning, even if the plot isn't all that original. In the near-future, a pair of agents hunt down and kill cyborgs - the "borrowings" from Blade Runner

I still owe you, big-time, for recommending "Galaxy of Blood" to me some months back. I'll get even for that. I've been seeking out Tarkovsky's "Stalker" for some time...one of these days, I'll nail it. Your tastes are eclectic, your aesthetic completely mad. Makes for some fascinating choices. Always look forward to your posts...

Is Delicatessen deserving of the obscure tag? Perhaps to mainstream audiences, but they're not likely to be reading this. Anyway, as well as that one I've actually seen 3 others from your list - Le Dernier Combat, Avalon and Natural City.

I can think of a few more recent releases which I watched this year - 3 French ones - Immortal, a French one directed by Enki Bilal, Chrysalis by Julian Leclerq and Eden Log by Franck Vestial - and from Spain, La Hora Fria from Elio Quiroga (the UK release is translated to The Dark Hour for some odd reason, as it should be The Cold Hour, which makes more sense).

I considered putting Immortal on the list, but its use of CGI is a bit clunky. Chrysalis and Eden Log I'm aware of, but don't own. There's also Marc Caro's solo debut, Dante 0.1. The Spanish one is new to me. Thanks.

It's curious that your definition of obscure pretty much equates to foreign. Not much of a surprise. What would be more interesting is a list of original English language pictures that might be considered obscure. Not sure if Galaxy of Terror qualifies as obscure. I actually thought it was infamous for its almost alien sex with Adrienne Barbeau scene.

Given how little foreign-language films are watched in the English-speaking world, is that really a surprise? But then I did say I don't consider foreign films such as Tarkovsky's, or Alphaville, or The Host especially obscure.

There's a reason why it's difficult to find good but obscure English-language films. They're obscure because they're rubbish. Perhaps there's one or two - although I don't think I'd call Primer, for instance, all that obscure...

I would also recommend Frankenheimer's "Seconds" for your list. It's a pitch perfect nightmare ride through a dystopia that just happens to be contemporary society.