Days of Future Past

A couple of weeks ago Niall Harrison wrote about Gwyneth Jones' Kairos on Torque Control. Since I've long admired Jones' fiction, I thought I'd do something similar and post a review of her 1986 novel Escape Plans. This review is actually a few years old, but never mind. 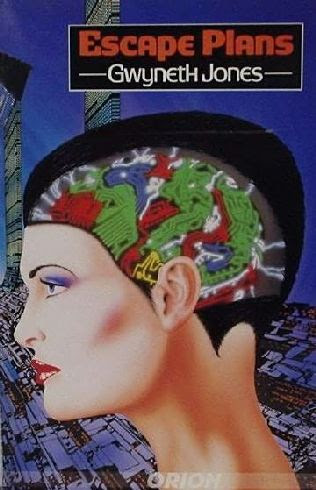 I consider Gwyneth Jones one of the best British science fiction writers currently being published. So it shouldn't really surprise me to discover how good her novels are whenever I reread them. Escape Plans I first read in the late 1980s, probably soon after reading and falling in love with Kairos. When I came to this reread, I had not forgotten the story - a member of an orbital-based elite is trapped amongst the 1984-ish drones of the "underworld" (Earth) - and I'd remembered the invented acronymic language which peppered the text. What I had forgotten was how well-written the novel was, how well-designed its background, and how... well, perhaps "clumsily-plotted" is too strong a term: but the story does seem to bounce from incident to incident, revelation to revelation, without actually come to anything more than a purely personal resolution.

ALIC (apparently a computer acronym, but it's not in my OUP Dictionary of Computing) is a VENTURan, a member of a space-based society. VENTUR had originally been set up to colonise other star systems, but it never left the Solar System. And then the VENTURans ended up saving the Earth’s population from itself. ALIC (pronounced "Aeleysi") is enjoying a holiday on Earth at SHACTI, Surface Habitat Area Command Threshold Installation, a planetary facility for the VENTURans. It is located on the Indian subcontinent. At a party, ALIC meets Millie Mohun, a bonded labourer jockey, who appears to be wearing a forged identification tag. The Earth's population are, bar a minority of ruling "enableds", all bonded labourers or "numbers". Millie spins ALIC some story about being blackmailed into wearing the false tag; ALIC decides to help her. To this end, she infiltrates the numbers in SHACTI's Sub Housing (the numbers' underground hive-like city). Unfortunately, she soon finds herself trapped as a number, her VENTURan identity lost to her. And then a portion of the Sub number population rebels against their masters and the systems that maintain their habitats...

The plot of Escape Plans seems initially inspired by the story of Orpheus, who ventured into the underworld to rescue his wife Eurydice from Pluto. It is, after all, the vague feelings of desire for Millie which motivate ALIC to set out on her ill-considered journey. However, not content with this, or with Escape Plans' departure from the myth when ALIC (now Alice) finds herself trapped as a number, Jones adds a further twist to the plot. Millie Mohun, many of the numbers believe, is immortal. As the story progresses, yet another myth takes this one's place: Millie Mohun is an alien, come to Earth to deliver the multitudes from servitude. The VENTURans had already discovered that Earth is trapped in a bubble-universe, and the only world in it with life. Millie, the numbers claim, is from outside, and part of her message is to lead humanity to the galactic confraternity which exists beyond the bubble-universe.

It is perhaps an unnecessary complication of a story which is not all together easy to parse in the first place. The setting, the use of an acronymic language, the mentions of the myriad systems, the deliberate confusion between the systems' real and virtual locations, and the metaphors used by the Earth's populace in explanation of this... all serve to richen and partly obscure the story. Happily, the prose is so well written, it pulls you along with the plot.

That Jones is familiar with India (I believe she's visited the country several times) shines through Escape Plans. For one thing, the novel's matriarchal society strikes me as a deliberate irony. In rural Indian society, females are considered a drain on family resources: girl children must be married off and dowries paid. Boy children, on the other hand, will grow up to become contributing members of the family. In Escape Plans, it is the men who are entirely useless. The Earth culture is based upon the use of humans as processors in the pervasive computer systems which run life support, law and order, communications, etc. But only women can perform this role. Men cannot do it. This is a motif Jones has used many times: the society of her Divine Endurance and Flowerdust is matriarchal; and she also turns the tables on gender roles in her Aleutian trilogy.

Having read Jones's later works, it seems to me that her depiction of technology in Escape Plans also echoes her use of it in later novels. The acronymic language used in Escape Plans disguises this somewhat, but the systems of the book are based upon a computing model which is probably more familiar now than it would have been in the mid-1980s. Escape Plans' systems are distributed and pervasive. Their real location, as opposed to their virtual location, is an important plot-point. They interconnect in a fashion not unlike the Internet - which predates Escape Plans by a couple of decades, but did not really become ubiquitous until the early 1990s.

I opened this piece on Escape Plans by stating my high regard for Jones's writing. It's an opinion I've continued to hold with each book of hers I've read - or re-read. Escape Plans was certainly worth a second look.
Posted by Ian Sales at 13:00

It's interesting the regard that Ms Jones is held in. I've met her and like her, but I find her fiction almost unendurable. It is, for me, not quite unreadable, but I wish it was; I waded through the Aleutian trilogy and enjoyed it as much as if it were thick sewage. Days of my life that I'll never see again, filled with ultimately unresolved and rather pointless musings on the nature of humanity, some improvised and to me horrendously implausible and unbelievable xenobiology, unsympathetic to downright hateful whinging characters and joyless settings.

Tanya was most insistent that I read the "wonderful" /Bold As Love/. From my prior experience, I demurred, evaded and hedged around. So she gave it to me for my birthday, some years ago.

Well, since I passed 35 or so, I don't bother finishing any book I am hating, and I gave up on this book, near-invisible under the piles of superlatives lying upon it, within about a quarter of its length. More hateful characters I just want to slap doing things I don't care about in a world I found intensely dislikable.

I just don't get it. I can't understand what people see in it.

I recently read Randy Byers' lengthy ode to GJ and the Aleutian books in particular, and it's as if he read something else entirely. Very odd indeed.

On which note, I've been trying to explain to some friends why I love Neal Stephenson on LJ recently, here:

(No idea if Blogger lets me insert hyperlinks. Pure-play blogs are far too solipsistic for me; there are millions, and less than 10 I read regularly. Feel flattered. :-)

I recently read Randy Byers' lengthy ode to GJ and the Aleutian books in particular, and it's as if he read something else entirely.

Ah well, you see I don't get the Stephenson thing. I thought Snowcrash was mildly entertaining, Cryptonomicon twice the size it needed to be, and I gave up on the Baroque Cycle halfway through. I feel no burning desire to buy Anathem. But I will be buying GJ's new novel, Spirit when it's published in December...

There's a horrible predictability to being quoted when I'm ranting. Alas.

Randy's piece was in his dead tree TAFFzine a few years back. Details here:

He may well still send a copy out. I don't know of an online version, though, I'm afraid.

There's another law of blogs that says you get the most hits when you slag something off...

As you have split your replies, so shall I. (Either that or I didn't think on in time; you decide.)

Jones goes on at great length about what's inside her characters' heads and seems to regard the world-building aspect as merely setting a stage for said characters. (This is, of course, an oversimplification!)

Neal Stephenson, it seems to me, tries to inform, educate and entertain (not necessarily in that order) with world-building, and to populate these worlds with interesting, sympathetic, realistic viewpoint characters and symbolic ones who serve his dramatic purposes, from /Snow Crash/'s Raven to the Equity Barons of /The Diamond Age/.

I find the latter not only accessible but fun; his books are always a fascinating read, rich feasts packed with delicious detail. I suspect I react so positively to Kim Stanley Robinson for similar reasons.

I cannot recall a single character from a Jones piece that I ever found sympathetic. They are sometimes richly drawn, yes, but they're also deeply unsympathetic, uninteresting, and sometimes -- I haven't read enough to say "often" -- they're predictable stereotypes. What was the troubled-rock-star-who-wants-to-make-a-difference in /BoL/? Ax Preston? Evokes the same [ironics on] warm feelings of affection and esteem in me as Bono [end ironics]. And at least Bono bought me a drink once.

I'll give you this, Ian. While I always find your opinions on books interesting and stimulating, they're more often a guide what *not* to read than what to seek out!

(E.g. Lawrence Durrel - awful, tedious, arty look-at-me-I'm-so-clever Literature-with-a-capital-L. Little brother Gerald: lifelong hero; I own all his books, and find him a wonderful, inspiring person, an insightful travel writer, a fine humorist, an engaging populariser of animals and wildlife and the plight of endangered species, and someone I personally immensely admired and at whose death I wept.

In which regard, I think our views differ quite significantly.)

Stephenson's fatal lack, to my mind, is rigour. He's an undisciplined writer and storyteller, but he doesn't have the singular voice, or inventiveness of, say, Ian Watson, which would allow him to get away with it. He also writes far too much - something you can never accuse Watson of. I also think Stephenson has yet to master the art of info-dumping - and while some of his exposition in Cryptonomicon was entertaining, it still sat there like a stone in your soup.

Lawrence Durrell... writes the most beautiful prose of any writer I've read - see my post on John Jarmain's Priddy Barrows in Nov last year for some examples. I'll admit Durrell often seems to lose control of his plots - which may be part of his appeal, given that my first choice of reading is sf, which is a very plot-based genre. Another element which attracts me to his fiction is the thoroughness with which he dissects his characters. The characters of modern writers such as McEwan and Faulks seem superficial by comparison.

Gerald Durrell... I've only read My Family & Other Animals. I wrote about it on here last month. It was a very funny book, but the prose was so wildly over-ornamented - almost as if he was trying to write like Larry. Speaking of which, I wonder how much of your opinion of Larry has been coloured by his characterisation in his brother's books. He certainly comes across as pompous twit in My Family & Other Animals.

Funny that, despite being so completely on opposite sides regarding Stephenson, Jones and the Durrells, we both like KSR...